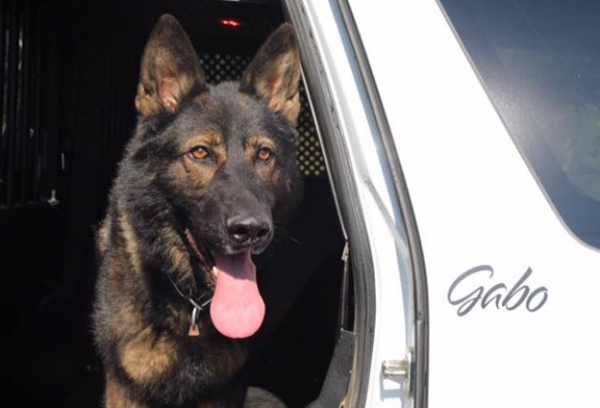 K9s like Gabo are the most loyal companions a law enforcement officer like could ask for.  That’s why I knew he was the right K9 for this mission…

You can just see the pain in Gabo’s face after being shot so many times. 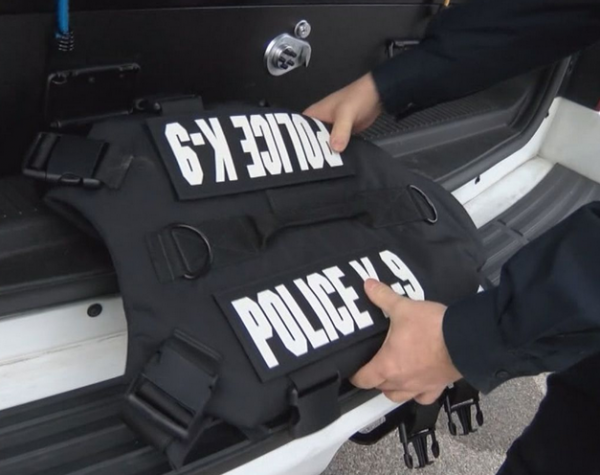 This is the vest that saved Gabo’s life.  I’ll always be thankful for the kind people who made this possible. 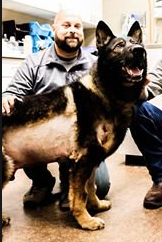 With Gabo during his recovery.  You can see where they shaved him to treat his wounds. 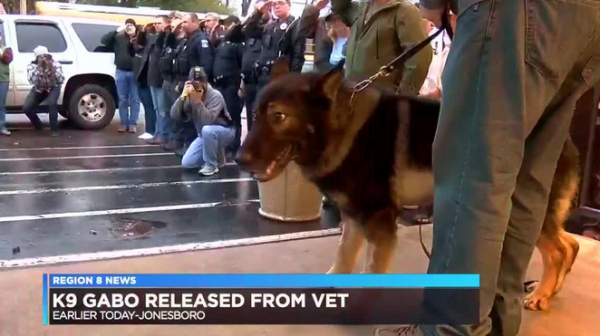 Gabo leaving the hospital to a crowd of cheering fans!

The walk to my truck was the longest one I ever had to make. Gabo had been my K9 companion for several years.  He was also my best friend.   He was the bravest dog I’d ever known and wouldn’t hesitate to put himself between you and bullet.

That’s what made me so scared for him… We were on our way to do some training when the dispatcher’s voice came over the radio: “Shots fired at the Gladiolus Apartments.  All available units please respond.”

“That’s us buddy.”  I said to Gabo, who let out one of his trademark barks, and we floored it to the location of the shooting.  When Gabo and I arrived we learned that a woman had shot her maintenance man in the face, neck, shoulder, and arm and was now barricaded in her apartment. The negotiators had been talking to the woman for hours, trying to persuade her to give up.  But she never responded.  It started getting colder.  It started getting darker.  And it started getting dangerous.  The time for negation had ended.  The time for action had begun. K9 action…

I told our command staff that there were four K9 units on the scene and that if any K9 was going to be deployed, it should be Gabo.  I wanted the other handlers to make it home to their families.  So I volunteered Gabo and myself for the mission. It didn’t start to sink in what I had volunteered us for until I started walking to my truck. I opened the door and sure enough, Gabo was happy to see me.  His tail was wagging, he let out excited barks.  He knew he was about to do something.  But he didn’t know what.  All he and I knew was that he was happy. I put his collar on and took him for a brief walk so he could stretch his legs.  After a few minutes I knelt down beside him, stroked him on the side of his face, and looked into his big brown eyes and told him I was sorry for what was about to happen to him. I told him over and over again that I was sorry and that loved him.  But he just looked at me with his loving look and wagged his tail and licked my face.  He had no idea what was about to happen to him.

As Gabo and I walked towards the stairs of the woman’s apartment I heard the other officers saying “It’s Gabo!  Thank goodness it’s Gabo!”  When we got to the door of the woman’s apartment, I gave Gabo the command to search it. He checked the living room, kitchen, and bedroom before coming back to me.  This meant there was only one place left the woman could be hiding… I knew it was getting ready to happen.  I feared this might be the last time I was going to see Gabo alive.  I gave Gabo the command again.  He passed the kitchen and made a hard left into a narrow space.  And that’s when I heard the first shot…Gabo started crying and yelping! I called for him to come back.  But then…he went back after her! And that’s when the unthinkable happened…

Four more shots rang out!  Gabo was crying and yelping even more, but he wouldn’t let go of her!  He just kept pulling and tugging!  I grabbed Gabo by the vest and carried him out of the apartment and down the stairs while the other officers rushed in to subdue the woman. I could tell he was hurt bad.  He had been shot in the upper chest and in the elbow.  Blood was pouring out of his belly!  “We’ve got to get him to the hospital now!” I told my guys.  Amazingly, in the middle of all this hysteria, the calmest one there was Gabo.  Here was a K9 who had just been shot, blood oozing out of him, and yet he was the one who showed us all that we could be calm.  He didn’t growl at anyone or show any kind of aggression. I‘ll never forget that.

The hospital staff was ready for him when we got to the clinic. Even though, he had just been shot several times, he walked into that place like it was any other visit to the vet.  He hopped on the examining table, laid down, and let the doctors and their staff go to work on him.  They sedated him so he wouldn’t feel any pain and they shaved him down so we could all see where he was wounded.  And that’s when we discovered what really happened to him…

A number of bullets hit Gabo for sure, but they passed right through him. One bullet even went through his liver!  I didn’t realize that K9s have guardian angels until we examined the last bullet.  That bullet — the one that was gonna kill him — never found its way into his body.  That’s because it was stopped by something that human police officers like me are fortunate to wear every day:  A ballistic, bullet and stab-protective vest.

Before Gabo and I went into the woman’s apartment, I put on a bullet and stab protective vest that was donated to him by a wonderful organization called Vested Interest in K9s, Inc.  Vested Interest’s director, Sandy Marcal, had no idea what her organization’s kindness did for my Gabo and me that day until I told her.  Gabo’s vest saved his life.  It stopped a bullet that would’ve punctured Gabo’s heart and lungs had he not been wearing it.  It’s the reason I’m not sitting here writing you about a dog that died.

I’ll always be grateful for Sandy and her supporters — people like you — who helped save my partner’s life.  And not only did it save Gabo’s life, but it’s the reason my other buddies are alive and were able to go home to their wives and kids that night.  There are so many other K9s out there like Gabo who put their lives on the line every day.  While me and my fellow human officers are putting ourselves between the public and the criminals… Gabo and his pals are putting themselves between us and their bullets.  And while more than 3,400 of those K9s have vests to protect them thanks to Vested Interest in K9s, Inc., there are many more that don’t.

Of the 30,000 K9s out there patrolling the streets every day, the vast majority of them are doing it without any protection at all! Are we just supposed to let them go unprotected while humans like me get to wear vests to protect us?  Hell no!

That’s why I’m asking you to support Vested Interest in K9s, Inc.  They are the largest, nonprofit organization donating custom-made vests that are bullet and stab protective and that fit comfortably on our K9s.  Trust me.  I know.

Gabo’s vest is so comfortable and lightweight that he forgets he’s wearing it half the time.  But perhaps one of the biggest blessings is that getting this vest for our dogs doesn’t cost us anything. Vested Interest in K9s, Inc. donates them to our departments.  No strings attached.

These vests are very expensive and difficult for most departments to afford.  So having them donated makes a world of difference. But just because they’re free for the K9s, that still doesn’t mean it’s cheap for Sandy to buy them in the first place.  It can cost almost $2,000 to get a vest that is NIJ certified AND provides maximum coverage and protection of the K9’s vital organs.  Gabo wouldn’t be alive today if it weren’t for her organization. But there are so many other handlers out there whose K9s are walking into bullets and knives without anything protecting them. We MUST change that!

As a nonprofit organization, Vested Interest in K9s, Inc. relies entirely on the generosity of kind and caring people like you to provide law enforcement K9s with the kind of vests that saved Gabo’s life.    I can’t tell you how grateful I am to know there are people like you out there who care about protecting our law enforcement K9s.  I know your desire to protect them reaches far beyond anyone else.  On behalf of all my brothers and sisters serving in K9 units across the United States, thank you for protecting those who protect us.

P.S. After Gabo was shot, were weren’t sure if he could return to duty.  Would he be afraid of gunfire?  Would he hesitate to attack?  We just didn’t know.  Well, I’m happy to report that Gabo has been cleared for duty and is patrolling the streets with me once again!  Our bond has never been stronger, and it’s all possible because people like you care.

Get the latest news from VIK9s